I'm not crazy, that's why I go to therapy

Going to a therapist still has a certain social stigma, although something is changing. The link established between mental health and the so-called 'madness' means that many people still think that going to therapy is a sign of not being "very trustworthy".Even those who regularly go to therapy feel a certain modesty in talking about it or acknowledging it. It's like "those things" have to stay in the biggest secret so no one suspects they might have a mental disorder.

More and more people say that going to a therapist is a healthy habit, which helps their personal development. Among those who have no qualms about their experience, we can find all kinds of profiles: students, sportsmen, entrepreneurs, unemployed ...Here are a dozen testimonials from people who go to therapy as a way to maintain their emotional health, understand themselves better and understand others. Nothing to do with that distorted view that taking care of the mind is a 'crazy' thing.

I go to a therapist and I'm not crazy

The first testimony to know how online therapy can help us is given by Josh McCully, a 68-year-old retiree, who admits that it took him a long time to take the first step because he associated psychological care with serious mental disorders and has now discovered tips for taking care of mental as well as physical health.

"It is true that, at first, he had a certain modesty because it is not something that goes around. There are more people going to therapy than you know, but it's still kind of scary," he says. "What I knew about going to therapy was what I had seen in the movies: a couch and a man taking notes without saying anything. Patients telling that they heard voices or related their dreams and then the therapist talked to them about problems with their parents or things like that".

Josh Mckelly reflects a very common idea, which has to do with the image of the Freudian psychologist interpreting the patient's phrases according to the psychoanalytic perspective. The cinema of the fifties helped to create this stereotyped image of a type of therapy that is not scientific, but that today seems to be losing strength. “In fact, I met a young girl who now helps me to see life in a different way. I feel more useful to others and find satisfaction in doing small things that I didn't care about before. For me, going to the sessions is almost like going back to school, but the subject is me.”A similar view is that of Anna, a 50-year-old woman who lost her job and is now trying to reinvent herself. "My friends encouraged me when I told them I wanted to go to a therapist. At first, I wasn't sure, but I felt I needed extra help to deal with this new stage of my life. I wasn't afraid to tell my closest circle, but it's not a nice thing to talk about in general. For Anna, it was easier with her friends than with her family because "it always seems that you have to give more explanations. Actually, my mind works well, I'm not crazy or depressed, I don't have visions. The only thing is that I needed professional support to find myself. That's something for which a few chats with friends and family isn't enough.

Other Effective Ways to Do Therapy

Facing the emotional void and enjoying life again seems like habitual desires. Another opinion is offered by a married woman with two children, who also needed help to feel better. "Frankly, I was afraid to let myself go and fall into a mood that could lead to depression," says Theresa, 43. After having my second child, I began to notice somewhat discouraged, with no desire to undertake any project, no interest in the world; I don't know, and I didn't feel like going on vacation. So much laziness and idleness even made me tired of myself. And, well, things happened that led me to look for a therapist.But Theresa found an alternative to the face-to-face consultation.

"On the Internet, I found an online psychotherapist who made everything much easier for me. I didn't need to move or waste time in waiting rooms. For me, it was the perfect resource, in my house, at the time that best suited me, and the truth is that it has helped me to make sense of things.

It also seems that, on many occasions, the pace of life is faster than many people can desire or endure. That brings with it some emotional problems, as Adam, a 54-year-old self-employed businessman, tells us. "What's crazy is not going to therapy with the life we lead" he criticizes. "We spend years training to then spend years working a lot of hours to maintain a certain standard of living, although we can hardly enjoy it. I believe that going to therapy is a way to not lose perspective of what is important and to avoid daily stress. So we don't fall apart because of situations that we think are catastrophic or if we have many problems. As they say, they never come alone.

There are many topics to deal with in online therapy, in this case, the fifth testimony also represents another group of issues very common in psychological consultations: the lack of love. George is 43 years old and experienced several failures in his relationships. After more than a year without overcoming a breakup, he wondered what he was doing wrong and sought professional support. "I felt guilty, unable to understand what I was failing in and to try anything with another woman again. After several sessions, I understood that my mistake was not in how to handle the relationship, but in choosing a partner. For some reason, I was attracted to girls with whom I could not have a common project because we had many incompatibilities. I didn't pay attention to those things when I was considering having a stable partner, I worked almost like a teenager, due to pure physical attraction. I don't think it's crazy to go to a therapist to learn how to relate with others”.

Caroline, a 30-year-old girl who was also tired and needed to detect and leave a toxic relationship. She says, “I started going to therapy to take control of my love life. I don't think it's a mental disorder, it has more to do with knowing how to manage emotions. Now I am better at distinguishing what suits me from what I only want at a specific time. I have learned not to look for compromises with those who don't want to compromise.”Many people focus their lives on how they feel about someone, and this emotional dependence causes a lot of suffering. "I've never felt as little as when I lost my boyfriend," laments Sophie, 34. “I went to a therapist to see if I could get some treatment to calm my anxiety. I kept looking at my phone waiting for a signal. Of course, the psychotherapist doesn't give medication. At first, I thought that going didn't help at all, because it didn't help me to calm the pain of the loss; in fact, because it didn't give me hope of recovering it, which is what I needed. Little by little, the main focus of the sessions stopped being my boyfriend to be myself. I was beginning to recover.”

Choosing the right psychotherapist is key

Psychology offers no magical hope to satisfy the patient. It seeks lasting solutions, changes in attitudes and behaviours to be happier, but without giving false illusions.This difference was also proven by our eighth testimony, Charlie, a 28-year-old draughtsman. "Going to a therapist is more common than you think, but not everyone's the same. It is important to find professionals based on contrasting theories, not on cosmic forces of the universe or fairy godmothers. Only then can they help you in a consistent way, if I wanted mystical explanations I would go and find a confessor. I changed psychotherapist when they started talking to me about magical therapies. You have to make the right choice.”

The help of a psychotherapist can improve your quality of life.

The last two testimonies are also very earthly. The first of them, Simon, who simply sought help to "be more productive in my studies," he admits. "I was a disaster organizing my time. My sleep schedules were totally disrupted, my meals were at any time. My study hours were infinite but unprofitable. I went to therapy to put my daily life in order. I don't see anything crazy in that.”One of her friends, Louise, 30, also encouraged herself to try some online therapy sessions. "I didn't even think about it. I never liked telling anyone about my life. But it's as if everything on the Internet were less embarrassing. I let go more and I think it's being useful. For what? we asked her: "well, it's to help me control my weight and some other things that have to do with my insecurities, nothing else. I'm not crazy, I just want to feel better.”Like them, you can start improving your life right now. You just have to put aside those preconceived ideas that therapy is for crazy people and trust a professional who will help you know yourself better and value your day to day life.If you want to improve your level of well-being, in TherapyChat we can help you. We are international leaders in online psychology and we have the right therapist for you. 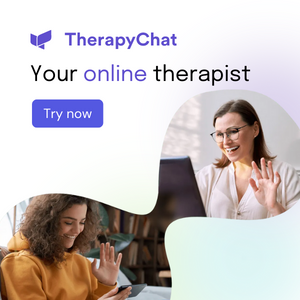 Temas de interés:
Anxiety
Business
Coaching
Couples therapy
Depression
Mourning
Online Therapy
Self-Esteem
Sexuality
Work
Artículos recientes:
Ageism: why it's a good time to invest in senior talent
Why is it important to focus on the emotional well-being of your team?
Burnout Syndrome; what is it, why does it appear, and how can we avoid it?
Opportunities and challenges for leaders and managers in hybrid work models

Tips to prepare for your first online therapy session

Did you know that after the pandemic "online therapy" has increased its search on the internet by more than 40%?

Aspects to consider for online therapy

According to data from the Online Psychology Barometer (Mundopsicologos.com, 2021), around 95.30% of psychology professionals offer online therapy.

How to prepare for your first therapy session

Asking for help is not always easy because we often perceive it as a sign of weakness or failure.